The following is taken from a local publication on the History of Young America that gives a history of Stiftungsfest and
how it was started : 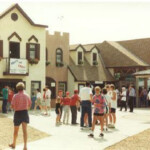 Carl Bachmann, the grandfather of Eda Shelby living in this community, loved to sing and was gifted with a beautiful tenor voice. Carl also had a dream in which he was leading a group of men singing songs from that era. Most of the songs were sung in German because all had a very German background. Then he awoke, but the dream gave him an idea. The following day he gathered together the best male singers in the community and men willing to put in hours of practice, and that night they gathered at his home for their first practice. That night in 1861 in Benton, Carver County, the “Pioneer Maennerchor” was born.

The first members were: Carl Bachmann who was chosen president, Heinrich Bachmann, Adolph Hoftermann, A. Schrimpf, H. Verufen and Henry Hostermann. During the following years, numbers came and went. By 1911 not many members were left. Most had died, and the remaining members discontinued singing except at Stiftungsfest when two would burst into song at the park.

After practices, the men would gather around a table known as “DesBrosse Runde Tisch”. They would play cards and drink beer (never to the point of inebriation, though). The beer glasses, about 5 inches high, were placed on a shelf just below the top while playing cards. Many people have inquired as to the whereabouts of this table. The writer, red-faced and with a guilty conscience, has to confess she chopped it up for kindling wood about 1931 as it was excess baggage in moving at that time.

In 1864 to 1867 several members’ activities were curtailed as they, in line with men from the entire U.S., enlisted for army duty in the Civil War. As soon as the war ceased, though, society again became active. The minute books, which began in 1861 but were abandoned several years later, are now in the possession of Eda Shelby. She hopes they will never be destroyed.

The meetings were held in homes, alternating between Schnappsburg and Young America. In 1867 they were held permanently in Young America, where the society built a special building, “The Singers’ Hall.” Once a year, the men and their families and friends met for a picnic in the old “Volger Woods”, then the “City Park.” They chose the name “Stiftungsfest,” which means Founders’ Day Festival.” Later they moved to the new city park at the west end of town. Observance grew and grew until the entire community became involved, and a baseball game was held, along with entertainment by the Turn Verein from New Ulm. A special train brought people from New Ulm along the way in the morning and returned in the evening.

Gust Trick led the Stiftungsfest parade for many years. The parade started at the Singers’ Hall and marched east to Main Street. When Gust came to the corner (now where the Gasthouse is), he would shout; “Links um die Ecke, Varvart marz.” (To the left around the corner, forward march.) Then up the street to the park, they marched.

July 7, 1938, was the date of the last meeting of the singers. The six members previously mentioned were present at this meeting, called to order by President E. Bachmann. Secretary August Ackermann records, “It was moved and seconded and carried that the society of the Pioneer Maennerchor be from now on disbanded and wish the village and fire department the best of luck in their undertaking. It was then moved and seconded for adjournment, peace, and harmony prevailing among the members.”

As a result of the dissolving of the group, the Singers Hall and grounds were presented to the Village of Young America. The village authorities, in turn, released the property to the fire department to manage the hall and carry on the traditions of the old singing society. In the fall of the same year, the fire department had full charge and responsibility for the Stiftungsfest celebration. Since that time, the department has spent much time and effort to sustain the interest and festivities occasioned by the announcement of this big day in Young America.

Now Stiftungsfest was born. What once was a dream for Carl Bachmann became a reality, and Stiftungsfest is now 161 years old – the oldest annual picnic in Minnesota.

In 1956 Bob Stolz, grandson of singer, Ted Molitor, began a new phase. Free BBQ sandwiches were served, Bob made the special sauce, and with the help of his wife and friends, barbecued meat for 2 or 3 days.

Another change was that Stiftungsfest became a three-day affair with parades of every description, bingo, rides, softball playoffs, dancing, singing contests, etc. You name it, Young America did it. Rain or shine was always a success.

Memories are many: Going to her dad when he was talking to someone to ask for a nickel; she got it, too. Going to the park the next day looking for loose change. The grandstand seats were open in the back, and change would drop out of men’s pockets during exciting moments. We would find it – oh, two or three cents – big deal. Big ice cream cones for 5 cents; a new dress; a family reunion. No beer bottles or cans – all beer was sold in glass mugs. Extra people were solicited to wash glasses!

To close with a bit of humor, here is an excerpt from an old “Young America Eagle” put in by Dr. Grivelli (Ted Grivelli’s grandfather, who was a health officer). It stated that all horse droppings were to be cleaned up and outdoor buildings disinfected before Stiftungsfest.